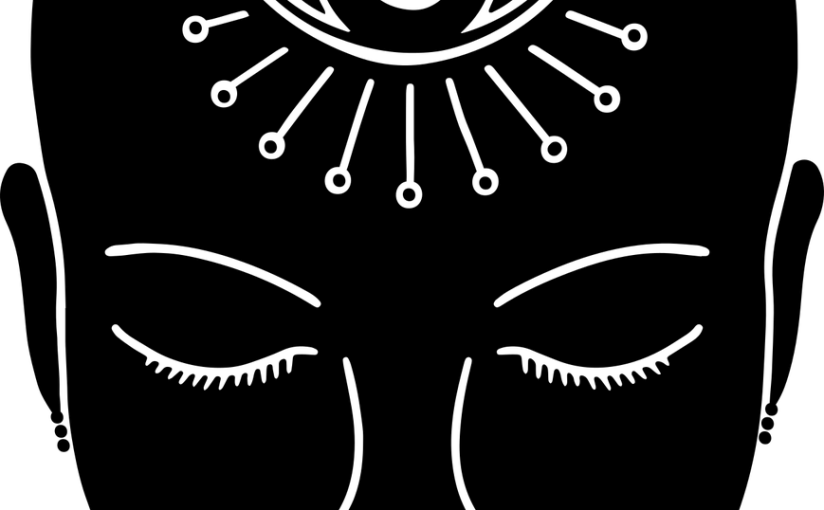 Mind-eye is called the third eye

When we lie down for getting sleepy, and then we stand up at that time, then sleep disappears suddenly. In fact, by standing and moving a little, the energy from the back rises. Yawning has the same effect. I was talking in the previous post about the possibility of strange happenings due to hypersensitivity born of Kundalini. When Kundalini is activated or awakened in the brain, the sensitivity of the brain increases greatly. All the experiences of the senses are felt intense. For example, the taste of food increases manifold. The fragrance also feels many times stronger. In fact, the prana energy from which the transcendental kundalini can be revealed can also reveal other transcendental experiences, such as the experience of flying, the experience of walking on water. These are called yogic siddhis. Actually these experiences are not from the body, but only from the mind. It is as if Kundalini is not seen with the eyes, but through the mind. This awakened mind is called the opening of the third eye. Because the whole world is from the mind, that is why in ancient yoga books such mental experiences have been written as physical experiences, so that it is easy for the common man to understand. But most people start to think of these as worldly or real physical experiences. A dedicated Kundalini yogi mostly derives the great joy of life from Kundalini. He is not subject to material things for the enjoyment of life. Therefore it is natural that if his Kundalini is damaged or weakened by any worldly troubles, he will be surrounded by darkness of depression. This will happen because he will not immediately understand, nor will he like the worldly way of attaining happiness. That is why it is said that the middle path is the best path, because spirituality and worldliness go hand in hand in this, so that there is no loss due to lack of anyone.

Sedentary lifestyle is the enemy of both materiality and spirituality

Advaita contemplation is more successful while doing yoga, because the good effect of Advaita is obtained only through Kundalini. While doing yoga, all the nadis, mainly the sushumna nadi and chakra, remain open. Due to this the Kundalini emerging from Advaita easily occupies the appropriate chakra. If the level of mental energy is low, the Kundalini occupies the lower chakras, and if the mental energy is high, the Kundalini rushes to the upper chakras. Similarly, meditation of Advaita at the time of any other type of physical activity also gives more Kundalini benefits due to this reason. In times of sluggishness, the nadis and chakras remain asleep, so that Kundalini cannot pass through them easily. For this reason, the fear of falling ill also remains. For this reason people with sedentary lifestyle are neither materially nor spiritually prosperous.

I feel a deep connection with all the world famous artists and rich people. They make me feel like my childhood friends and family. I may have reached the peak of material progress in the previous life, possibly like them. Then I must have felt the desire for Kundalini awakening and I would have tried for that, but I would not have got success. Due to its influence, I must have been born in this birth in the midst of the rich, world famous and spiritual personalities of the previous life. The experience of momentary Kundalini awakening would also have been received by its influence. The people who come under my contact must also have been great people of previous lives, and they must have got some kind of Kundalini association as well. They must have come under my contact with the same Kundalini effect. This means that hard work never fails. Anyway, naturally, the desire for Kundalini awakening occurs only after touching the peak of materiality. Psychologically it may also happen that through the power of Kundalini awakening, I feel attached to powerful people and things, because Kundalini awakening is the treasure of all powers.

Nothing is achieved without effort or on its own

Mystical outlook has made man careless. This makes him wait for a miracle to happen. This blog is breaking this mysticism. Everything including Kundalini awakening is scientific and it also requires a sustained logical approach over a long period of time like material things. This blog and website has everything to read about my so-called spontaneous awakening phenomenon, including books. Mainly, the book Love Story of a Yogi, then Kundalini science~ A Spiritual Psychology, Parts 1 and 2. Apart from this, following this blog will also provide fresh content every week. Many people think of me as having had higher spiritual experiences on my own or without any effort. The point seems true to a large extent, because I did not make any special efforts for them. I kept getting favorable conditions, and everything happened by itself. But the hard work of my ancestors hidden in it is not visible to anyone. My family was dominated by spirituality and high idealism for at least three generations. Because of this, my family’s name and respect was far and wide in the society. For two generations, my family has been working as Brahmin priests. Vedic rituals are performed in this work. The Vedic ritual is actually the first chapter of Kundalini Yoga, because it introduces a person to Kundalini, and strengthens it in the mind in an easy and worldly way. It was in the company of such a spiritual family that the Kundalini unintentionally made its permanent place in my mind. It means that the fruits of my family’s hundreds of years of hard work have manifested in me. I didn’t get something on my own. You don’t get anything by yourself. If we keep on following the path of spirituality, then our children, grandsons, great grandsons etc. will get its fruits. They won’t get anything on their own. This means, efforts made for Kundalini never fail. If the person who makes efforts does not see the fruits immediately, then the society and the world definitely get it. Over a period of time, even the one who tries will get the result.

Kundalini awakening is a rare happening. It seldom requires forceful attempt. Yes, one can be ready for it mentally as well as physically with forceful efforts. Forceful efforts should be at the level of prana energy available in a man otherwise too much forceful effort may harm body and mind. I tried same. I drifted with world for 15 years though I had nondual attitude always through my self made unique philosophy. Then on availability of excess of prana energy, I did forceful hath yoga for one year and then tantric yoga for next one month. Then I shed my this ego too and I again started drifting with the world. Although Yoga was continued as it was. This shedding ego of even doing yoga etc. or letting go produced glimpse of Kundalini awakening in me just as effortlessly. Still, no one shot a big arrow, because more important than awakening is the awakened lifestyle. To sum up, just a glimpse, because my aim was not any enlightenment, but I wanted to experience Kundalini awakening in a scientific way, and to tell people to save them from misgivings. At last the wish is fulfilled. This means ego of doing meditation or yoga or other virtuous deeds should also be shed away to get awakening. This has been told in scriptures by a famous advising sentence that spirituality grow through satoguna and awakening occur through shedding away ego even to that satoguna too. Satoguna means the manifestation of luminous divine qualities in the mind and body under the influence of yoga practice. Earlier I also did not understand the secret of this saying, but now I have understood its meaning clearly, practically and experientially. During the time of my awakening, I felt no this or that emotion, no special sensation etc. as told by many people in strange ways. All things were quite smooth. It’s all an energy game only. For willful awakening, people most often adopt wrong paths full of egotism and so never attain it. Few others keep cool and drift amidst the common river, however abolishing the ego. They attain it without special willful effort. Many take the middle path of balancing both, which leads to quickest success. Probably the same middle path happened to me as well.