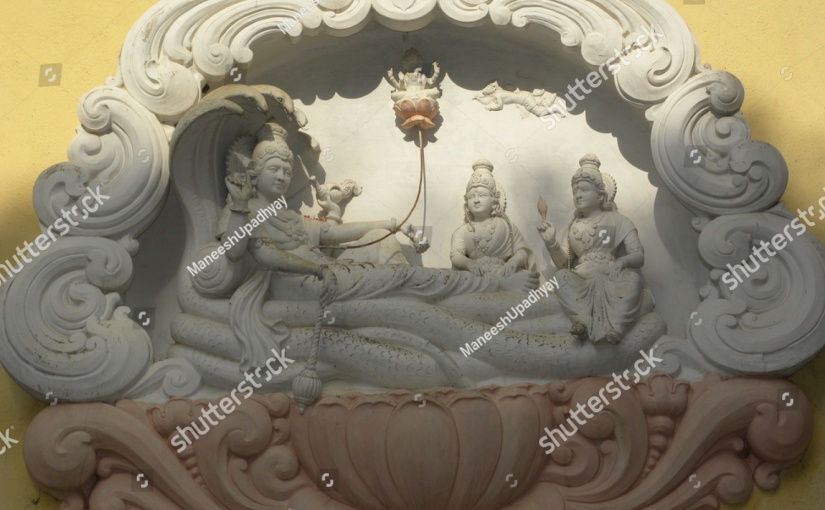 Friends, I do not get a chance to write my short experiences waiting to write long posts.  That is why I have thought that I will write only small thoughts about Kundalini.  This will keep a constant connection with Kundalini, which is very important for spiritual progress.  Anyway, in busy life it is not possible to write long posts together.

Kundalini also comes down by lowering the pressure of the brain

Kundalini appears in the brain as soon as one’s own present condition is considered as nondual like that of the Dehpurusha/body-man.  This creates a bit of pressure in the brain.  To bring down that pressure, the tongue is pressed with the palate, and the mouth is kept closed while not speaking.  Simultaneously, the thinking of descending Kundalini energy is done.  It is also thought that the pressure of the brain is descending through the front channel.  With this, the mind becomes light, and along with pressure the Kundalini also comes down and sits on a suitable chakra.  She then glows progressively due to the constant pressure coming from the brain.  The same pressure is also called Prana.  When the mind becomes empty or light, the Kundalini energy from the Muladhara Chakra ascends through the back channel to the brain.  The same thing happens with the mental trauma or emotional shock as stated in earlier posts.  Due to mental trauma, the mind becomes completely empty, and the Kundalini Shakti ascends in the back at full speed, that is, the sushumna channel, the most important Kundalini channel in the spinal cord opens.  The same thing happens many times with tantric alcohol use.  Even with that, the mind becomes empty.  In this way, the Kundalini loop is completed, and the Kundalini cycle starts.  It is also called microcosmic orbit.  It also calms the impulse of sexual lust, because its energy is absorbed by Kundalini.  This is also completely the case in a woman. As mentioned in the old post, their vajra is of comparatively small dimension, which is contained little bit inside body lotus. This is a major technique of Tantra.

Sheshnag’s middle hood is the longest

Even in the old post, I had told that when the Sheshnag is laid from the vajra to the brain through the spine, the sensation of vajra easily reaches Sahasrara.  Its main symptom is the shrinking of the vajra.  It gives a feeling of sensation in the center of the back.  The whole serpent is to be meditated together.  In fact, sensation has the property of movement and displacement. Sheshnag has  thousand hoods, which cover the entire brain.  Its central hood is shown to be thickest and longest. This central one is the most working type hood. That’s why kundalini runs in this hood. Actually, this has been done for the centering of sensation / Kundalini.  This makes the Kundalini run entirely in the central line.  Serpent also bends down his central hood and kisses the agya chakra located between the eyebrows.  With this, Kundalini reaches the agya chakra and creates joy with pressure there.  Many times, the Kundalini reaches the agya chakra directly.  Anyway, Vajra Nadi, one of the main nadis of Hatha Yoga, is described as going up to the agya chakra. The Kundalini descends best through the tongue from the agya chakra. One by moving his head and back here and there, the Sheshnag should also appear to be moving here and there.  This provides even more Kundalini-benefits.

Sheshnag is depicted in the Kshira Ocean / milky ocean, and its one thousand hoods are spread over the head of Lord Vishnu

The same has been shown in the post image above. In fact, our body is also a subtle ocean. This body has more than 70% water, which is spread all around. That water is as nutritious as kheer (a milk-rice-sugar dish) milk. The above Sheshnag is sitting in the midst of the milky water of the same body with its hoods erected up. The head of a man is in the form of his thousand heads. Sahasra means thousand in Sanskrit.

Why Centering is Important for Kundalini

Friends, every thing has its energy at its center. It is also called Center of Mass or Center of Gravity. Similarly, the energy of the body is highest on its central line. That is why the Kundalini is rotated on that line, so that it can get maximum power. I found it difficult to meditate on Kundalini in full sun. But when I meditated on the superficial central line of the Sun, it became easy and strong. All these things show that Kundalini’s psychology also proves to be just like physical science.